Journey's End at The Duke of York's Theatre

RC Sherrif's World War I play is a classic, covering the messages and emotions of wartime and trenchlife.
The focus of the narrative is the relationship between idealistic and innocent Lieutenant Raleigh and the gallant and wearied Captain Stanhope. While many may see the play as old-fashioned, not only so in dialogue but in issues covered, this production lifts RC Sherriff's play to another level so that the emotions are conveyed in a very human like dimension.
Tear-jerkingly moving, funny, accurate and gripping. Skillfull acting, the kind which is able to transform and engulf you in what seems can be the only way imaginable so by the playwright. Particularly notable is the visibility of the characters' transformation through war and trenchlife. The endless waiting, the power of the mind and the horrors of trenchlife are all portrayed flawlessy.
The final scenes leave you feeling overwhelmed with emotions. Powerful sounds, lighting and accurate stage design heighten all sensations. RC Sherriff's aim to convey the futility of war and the irony of patriotism is vivid.
Exemplary theatre at its finest. Highly commended and recommended.
Staring: Dominic Mafham, Graham Butler, James Norton, Tim Chipping and Christian Patterson.
Director: David Grindley
Designer: Jonathan Fensom
Lighting and Sound: Jason Taylor and Gregory Clarke
General Manager: Gareth Johnson 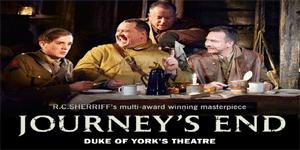 Posted by AshThack at 15:04 No comments: